The bare barrel of batting contenders

Australia’s batting has been broken for some time now. For anyone to think that this hadn’t been coming was deluded. We’ve been bowled out for under 100 three times in the last year, including the recent Cape Town 47 with a remarkably similar line-up.

Mike Hussey saved us in Sri Lanka, the bowlers got us across the line in South Africa, but that was just covering cracks as wide as the WACA mid 1990s.

If you can’t score over 400 in two innings against New Zealand, you don’t deserve to win. No pitch excuses, no crying poor. New Zealand also deserves credit. Just yesterday I ignorantly muttered that their lack of talent means to win they can’t afford to miss chances – on day four they dropped two chances and missed a run out but were still good enough to get the chocolates.

New Zealand were good enough and Australia were ordinary enough is more to the point. But while all and sundry are saying who should get dropped, it’s possibly more relevant to look at who can come in and add something. It’s not pretty.

There seems to be a pretty unified consensus as to who needs to go, but it might not be that easy. Is our long-existing thought that ‘if you’re not performing let’s get the next cab off the rank’ outdated? Is there anyone good enough waiting in the wings?

The best of the rest

Quite simply, Hussey is the biggest wicket in the Sheffield Shield. His output was limited due to national commitments last season (401@40), but he topped the list the year before and averages 55 with the stick so far this season.

Age is irrelevant: David Hussey is the best player in the Sheffield Shield

Yes, the younger Hussey is 34 years-old. But his first-class average smashes anyone in Australia outside of Ponting, Hughes or Katich. He’s in-form and has scored runs in Oz, England and on the sub-continent. He’ll make the grade.

Cowan epitomises the modern Tasmanian cricketer. Like most of them, he’s from New South Wales. Then there’s the fact that he’s regenerated his game to a level beyond what was possible at his former state.

The left-hander was treading water with the Blues, piling on runs in grade cricket but without any confidence or security at first-class level when Test teammates returned.

He’s become a good player with the Tigers, but a bad season last year averaging 34 left his career at the crossroads.

His solution: publish a diary. Genius. The media, craving for so long to know the inner-workings and insecurities of the professional cricketer they so much wanted to be (at least that’s the case with me) were already raving about this bloke even before he started eating runs like free pizza in the last three weeks. 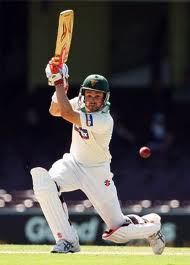 Ed Cowan is the in-form player on the domestic scene

My skipper used to tell me that part of making the next grade was performing well at the right time. Michael Beer didn’t even have to do that! Cowan has.

If Cosgrove was playing 25 years ago he could have been part of Australian cricket’s biggest batting line-up, joining Taylor, Boon and Ritchie as heavy-hitters.

If he was born in New Zealand he would have played 50 Tests, probably taken 50 wickets and combined with Jesse Ryder to seriously pulverise some afternoon teas across the world.

The fact is, Cosgrove was the victim (does Doug Bollinger fall in here as well?) of the ‘professional cricket era’. He’s the most talented player in Australia, but was dropped and then de-listed by an underperforming South Australia side because of his weight.

If weight of runs matter (or matter matters I guess), Cosgrove topped the Shield runscorers list last season, and despite a relatively lean (three weight references in one sentence) start this year is too good a player to be outside of the current national set-up.

They’re my top three. Voges is just outside those, Chris Lynn could have been but has had a shocking start to 11/12, and there’s talk from Queensland that Joe Burns is the real deal.

As for the pretenders, talk of Simon Katich returning is ridiculous. Starch, smarch, when you have a top score of 50 from your last ten digs you deserve to go.

Dan Christian can win a game but has a first-class average of 30. If that’s good enough for our Test top six we’re even worse than I thought.

Stop whingeing about Katich, he brought it on himself »
« Black Caps miss their moment

3 thoughts on “The bare barrel of batting contenders”