This was how it was meant to be. Ricky Ponting is freed of the captaincy burden, Michael Clarke embraces the extra responsibility of the role, both dominate with the stick and lead the next wave of players in restoring Australia to its rightful place at the top of Test cricket.

It’s been easier said than done. Several batting capitulations have left pressure on both men, one struggling to win his team and the cricketing public and the other struggling simply for runs.

Yesterday was their day out. Ponting was superb and now justifies his position in the side. None of this ‘he brings so much to the team’ or ‘we need his experience’ rubbish, Australia needed Ponting’s runs, and he’s now starting to come to the party.

While Sachin Tendulkar plays sublime shots before an almost inevitable concentration lapse brings about his downfall, Ponting has relied on sheer willpower to get past the cricketing reaper.

Yesterday was flawless. Unlike his previous masteries punctuated by big shots and a complete domination of the bowling, day two saw a different patience and maturity from the ex-skip. Whereas in his prime Ponting could seemingly smack any ball to any section of the ground, Ponting v2.0 waited for bowlers to stray and pounched when the many run-scoring opportunities presented themselves. 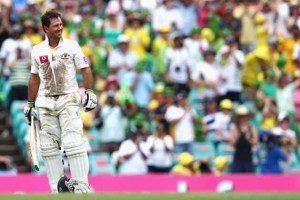 Onto the new guard, and like him or not, Michael Clarke has again showed here that he is Australia’s best batsman. His 251 was sublime, with punches, drives, flicks and pulls equal in elegance (think Mark Waugh) and brutality (Ponting). A rare mix.

Clarke and co. have the opportunity to continue the feast well into day three, helped surely by another day of defence and apathy from India in the field.

The line in the sand was drawn early. India needed a good first session, but after a passive opening spell from Zaheer, they retreated.

The only way back into the game was by taking wickets. What was the worst that could happen? A couple of slips and good bowling, matched by good batting, and Australia could have scored quickly enough to bat India out of the game. But at least then India would have fired a shot. To let a team overhaul your score with no slips, a deep point and deep square was unforgivable, and India were deservedly punished.

India are good front runners, but they went missing when the going got tough. It was a weak effort from a team of their experience.

The new era of Australian cricket twisted the knife for the first time on day two at the SCG. Day three offers to opportunity to scar India and further stamp their authority on the series.