Fair-weather? I think not!

She labelled me a ‘fair-weather’ Rabbitohs supporter. She said I liked Souths more when they were ‘losers’.

Once I’d stopped crying, swept up the broken plates and booked Jess’s bus back to Brisbane, Queensland (Forrest Gump reference – anyone?), I reflected on my supportership.

Was Jackson right? Could it be that a die-hard Richmond fan, one who in fact owns a signed, framed Brisbane Lions premiership jersey, was spot on questioning the legitimacy of MY love for MY team?

Is supportership even a word?

Obviously, (obviously!), Jess was out of order.

Only the genuine wear retro jerseys

And like any secure bona fide fan, I can quickly recite my fan legitimacy checklist:

Obviously, I could go on (and on, possibly mentioning Redfern and Grandma – because I’m legit, and more legit than you).

But as my vindictive, passive-aggressive response may indicate, there’s probably some truth to Jess’s claims.

My outward displays of Rabbitohness are less than they were 10 years ago.

I don’t wear the Bunnies polo to the pub like I used to in the TV Week sponsorship days.

And maybe, in an Australian cricket team type of way, I did like it more when times were tough.

Is there anyone else who would be disappointed when we signed Greg Inglis because it meant disposing of Beau Champion?

He was a local junior!

Does anyone out there think, like me, that the no pokie thing was fraudulent, that George Piggins was disgracefully treated like shit and that the Armani suit rubbish was alienating to the working class fans like me?

I mean, the idiots auto-replied my application to their digital graduate role despite my noticeable expertise and passion!

And the moon landing was obviously orchestrated one night in Texas?

Maybe, just like Jess’s sledging and my feelings for her, these things have all combined to chip away at my blind, unconditional love of the Rabbitohs.

Could it be that seeing John Sutton in the Randwick members in a white suit and no tie (before Ben Rogers tried to fight me, for those keeping score at home), left me idolising, even respecting the guys in the jersey a little less?

Maybe I’m just older now and a bit more circumspect than I was when my whole week was judged on the back of the team running 14th on the ladder. No wonder I was an angry teenager.

I don’t fucking know. But having supported Souths despite them signing the three Walker brothers (WTF?), I’m not jumping off now. And to prove it, I might just wear my Rabbitohs jersey to work, again. Like them apples Jess? 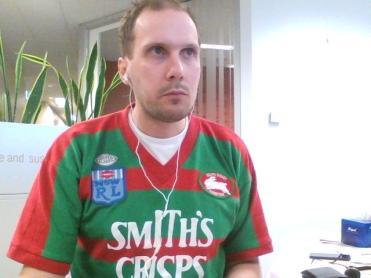 Dick those Rooster pricks and I’ll see you next Sunday night.

GF, GI and SSTID »
« Dixie’s guide to the Brownlow’s