Good from Gaylegate? Let’s do something about it

Just over four years ago, Mel McLaughlin was one of many nominees for the inaugural Peter ‘Zorba’ Peters award in an end-of-year sports column, an undoubtedly light-hearted reference to the Manly media manager’s light-hearted “good sort” quip to Fox journalist Lara Pitt when leaving the NRL judiciary.

The journo managing the award was none other than Telegraph sports editor Phil Rothfield. We’re hardly talking Huffington or online blog.

While some things have changed, much hasn’t.

The Chris Gayle interview and subsequent fauxpology has been done to death – nothing shits me more than a forced apology (good read John Birmingham in SMH) – so I thought I’d go from another angle, and scrutinise the overwhelming objectified placement of female sports journalists, particularly on TV.

There’s two things I want to make clear before I get into it. First, what Chris Gayle said was not on. His comments were out-of-order and the criticism justified. Also, I recognise McLaughlin as a highly-skilled, qualified and experienced sports journalist.

I’m aiming more to critique the objectified construction of female sports reporters, of which, as a male sports fan, I’ll admit, unfortunately and embarrassingly, I am actively complicit.

Erin Riley spelt it out in her blog, which was re-posted in today’s SMH:

All of these things, all of these reactions, are woven together by a single thread: that women’s participation in sport must be done in a way that is acceptable to men. Whether playing or reporting or even talking about sport, women’s presence in the arena is closely monitored and policed.

Hits me pretty hard, but difficult to disagree.

Another Fairfax journo (I’m starting to come across as a one-paper pony), Andrew Webster, said we’re lagging behind our US cousins when it comes to advancing female roles in sports coverage.

Bleacher Report, one of my favourite US sports news sites, is one of many channels that sings to this choir, with a recent salute to the top 40 most popular sports reporters focusing exclusively on seductive pics of sideline gals and anchors. 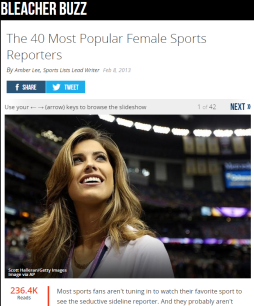 But, as Riley purports, and McLaughlin lives, could it be that the female sideline eye is simply the most practical place for qualified, sports-loving women to get a start on TV?

A rare female play-by-play caller, ESPN’s Pam Ward told USA Today that “more than 90% of them (aspiring female sports journalists) want to do sidelines. That’s what they see as possible. They see it as a female role.”

It’s ironic that Network 10, the BBL broadcaster, almost got over the crest of the wave. Around the same time as Rothfield was handing out his trophy, Kelli Underwood, Australia’s only female play-by-play TV commentator on male sport, was dumped from the network’s AFL coverage following noisy fan (male) discontent.

Instead, while it’s all well and good for the network to call out Gayle’s behaviour, they remain blissfully ignorant of their adherence to gender norms through McLaughlin’s role. And then there’s their general programming. The Batchelor anyone?

And no, Underwood didn’t feature in Rothfield’s calendar.

I’m willing to recognise that I’m part of the problem. Over beers, on the lounge, probably on social media, I’ve held female sports journalists to higher standards than their male counterparts. I’ve Rothfielded them on their looks. Guilty.

I’m also willing to be part of the solution.

The positive of this Gayle mess is that it’s called me out – and I hear ya. From here on in, I’m going to call out television producers and networks that tokenise female roles in their sports coverage.

And I’m calling on my male, sports-loving colleagues to stop being objectifying lemmings and join me on the bar stools.

There’s something about Robbie (or is there?) »
« Dixie’s ultimate Melbourne Cup preview

One thought on “Good from Gaylegate? Let’s do something about it”